We’re going to talk about George’s latest book, Gamer’s Rebellion, and he has some great , writing tips to share.

George is a Melbourne author and stay-at-home dad. He has written over 70 books for kids and teens, including, school readers, non-fictions books, chapter books, novelettes, novels and even a short story collection.

His latest book, Gamers’ Rebellion, (which I’ll be reviewing later in this post) completes the Gamers trilogy.

George is currently working on a secret project that he hopes to reveal very soon. Check out his website: http://georgeivanoff.com.au

1. Okay… I’m gonna start with the clichéd tip. Just remember, it’s become a cliché because it works. So, here goes — Write lots and read lots! The more you write, the better you’ll get at it (you know, it’s that whole practice thing). The more you read, the better you’ll get at writing. It’s a matter of observing what other writers have done, how they’ve done it and why it has worked (or not).

3. Don’t forget the little, ordinary, everyday things… eating, sleeping and going to the toilet. Allow your characters to do these things. Otherwise they may risk malnutrition, exhaustion and constipation. And unless these things are important to your story, they’re probably best avoided.

4. Don’t talk down to your audience, especially if they’re kids. Kids are rather astute at picking up on grown-ups who talk down to them. I use language that I think best describes what I’m trying to say — even if that means using words the average kid isn’t going to know. Often they will be able to grasp the words through context, and if not, there is something called a dictionary — they probably have them on their iPads. I also don’t shy away from complex concepts. The Gamers books tackle ideas such as: What constitutes reality? Can someone choose the sort of person they want to be? What does freedom actually mean? At its core, Gamers Rebellion is the story of unreal people becoming real, and then making themselves unreal in other to maintain the reality of an unreal world. How’s that for a complex concept? 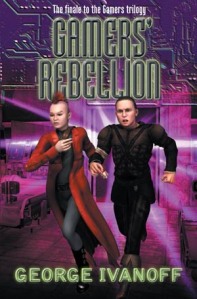 Gamer’s Rebellion is George Ivanoff’s finale to the Gamers trilogy and I have to say I am in total awe of how he kept track of everything and tied all the loose ends together.

The game was over! Or so they thought.

With hands tightly clasped, Tark and Zyra watched as all they had ever known melted away.

And then they were moving through greyness. It was like swimming through treacle. Up ahead, two intense points of white light called to them.

The greyness swirled around them, tugging and pulling.

Their fingers slipped and their hands parted. They were whisked away from each other and towards the light – towards the unknown.

This plot is a labrynth of twists and turns where you’re never quite sure just who is really the baddy.

Tark and Zyra finally make it out of the computer game and into the real world, but just what is real and after battling so many obstacles, is this the end of the road for their relationship?

Zyra has been captured by the designers and Tark has fallen into rebel hands – and everyone seems to have a hidden agenda.

They discover that dozens of children have been kidnapped and wired directly into the mainframe – and that the designer’s plans go way beyond the Game – they’re actually after world domination.

Gamers’ Rebellion rolls along at a cracking pace and sci fi lovers will be mesmerised by the gadgets and the detail with which George Ivanoff creates this imaginery world.

Gamers’ Rebellion is a sequel to Gamers’ Quest and Gamers’ Challenge, but works as a stand alone novel in it’s own right.

It’s a great book for anyone who enjoys action, adventure and a fascinating story world.

The Gamers series is published by Ford Street Publishing.