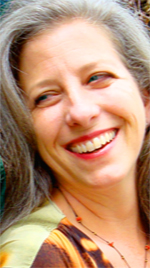 When I was in LA last year I met some amazing US authors. Today I’m thrilled to welcome one of them to DeeScribe Writing. Laura Elliott is the author of wonderful YA novels, Winnemucca, 13 on Halloween and her latest book, Transfer Student.

Today Laura is going to talk about how she wrote this page turning book and you can win a free ebook copy.

TRANSFER STUDENT will release on Amazon and Barnes & Noble March 20th. Here’s a little bit about the novel and a note from Laura about her inspirations for the story and her writing challenges. Be sure to read to the end to enter to win the EBOOK GIVEAWAY and this week’s SWAG!

Geek Rhoe and Surfer Ashley would never be friends.

Even if they lived on the same planet.

But, they’ll become so much more. 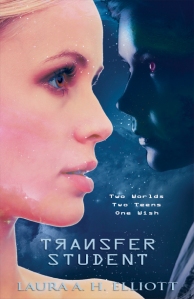 Earthling Ashley’s world revolves around winning daily popularity contests at Beverly Hills High School and surfing competitions with sweet scholarship prizes that will finally help her break free of her control-freak mother. Ashley never loses. Ashley never wishes on stars. But that changes when her senior class takes a field trip to the Griffith Observatory where Ashley’s conflicting feelings about her predatory best frenemy Tiffany, throws Ashley’s carefully-crafted Queen of B.H.H.S. title under the bus.

Meanwhile on planet Retha, Rhoe misses his dad, loves his mom’s home-cooked Glechy crag with a side of Ory sauce, is desperate to heal his sick brother and wants more than anything to win The Retha New Invention Competition. He and his best friend Yuke have worked for the past two years constructing the teleporting telescope Rhoe started building with his dad before an accident killed him. Rhoe’s never kissed a girl. Rhoe’s hero is the eccentric physicist, Ramay. But that changes when the telescope teleports Rhoe across the universe with an unintended side-effect. Ashley and Rhoe transfer––swap lives––when they make the same wish at the same time.

Popular-surfer-turned-boy-geek alien Ashley must handle life on Retha as Rhoe complete with webbed feet, low-gravity, and an obsession with Yuke, all the while being hunted by Rethan spies and resenting her hairy, flat chest. Boy-geek-turned-popular-surfer Rhoe must fit in at Beverly Hills High School as Ashley, compete in The Laguna Beach Invitational without becoming shark food, dodge boys’ affections, cool his preoccupation with Tiffany and his new body, on his quest to find the healing rocks he believes will save his brother’s life.

If only it were that simple. Some wishes can’t come true. Some have to. How far would you go for someone you love?

I wrote the first draft of Transfer Student in 2006 after my father-in-law died. It was a crazy, sad time. I was working at the Los Angeles Times on the re-opening of the Griffith Observatory [it had been closed for five years for renovations] and we were back-and-forth between LA and Fresno [a four hour drive from LA], more and more frequently as my father-in-law got worse and worse, eventually ending up on life support. His name was Ray. I named the Reathan word for “year” in his honor.

After Ray passed, just hours after, it was nighttime and my husband Joe, his mom and I all sat out on my mother-in-law’s patio and looked at the stars. She said she knew Ray was up there, one of the stars. And that’s all it took. I had the beginnings of a story about souls that traveled, that starjumped, through space. And I wanted to explore the idea of a parallel planet similar to Earth, a sister planet. Retha is that planet and an anagram for Earth.

There were other things that inspired the story too. Los Angeles was a major inspiration because I raised my kids there and I love the city. So I knew that the female protagonist would be from LA. And since I worked in entertainment for a time, I knew Beverly Hills would be a lot of fun to write about.

I also wrote about places I had more of a connection to––Griffith Park and Zuma beach. And lastly, a news story that unfolded over the years further inspired the plot as I wrote and rewrote Transfer Student.

This same news story is also why I decided to tell Transfer Student from two POVs, a teenage girl and a teenage boy alien. The news story profiled the hostilities surrounding a man who announced he would be having an operation to become a woman. Because he was an official in a municipality in the southern U.S. this was a very public, personal announcement. It made national news at the time. It captured my attention for a variety of reasons and I knew that I wanted to write a story about how the vessel that a soul inhabits doesn’t define it. The soul itself does.

A story that’s been written perhaps a million times, but I wanted to write about in a way that explored many things: what it means to love; what it means to be a boy or a girl; what it means to risk everything to become who you really are. Transfer Student is a classic fish-out-of-water story that I’ve written as a love letter to teens and also as a way for all of us to see a piece of ourselves in everyone we meet, no matter our differences, no matter what planet we call home.

As far as the actual writing of the story I had a few challenges. I had no idea how to write from a male POV. My early drafts really show that weakness. I always wrote Ashley in the first person. But, I’d always write Rhoe from the third person, as if I was literarily tip-toeing up to the first person present that he’s written in today.

I hope Transfer Student sounds like a story you’d like to read. Thanks so much for hosting me today, Dee. Here’s to wishing on stars!

My US writerly friend, Laura Elliott is giving us a sneak peak at her fantastic new YA sci fi, TRANSFER STUDENT.

The twist? One teen is an alien from the planet Retha.

In a galactic teleporting experiment gone wrong, Ashley, a Beverly Hills High surfing fashionista, and Rhoe, the biggest geek on planet Retha, swap lives. Only by surviving life as their biggest nightmare do Ashley & Rhoe discover their dreams. How far would you go for someone you love?

WIN TRANSFER STUDENT BOOKMARKS SIGNED BY AUTHOR LAURA A. H. ELLIOTT!
To enter to win all you need to do is tweet this & follow Laurasmagicday:

Giveaways include free ebooks of TRANSFER STUDENT, Amazon gift cards & weekly surprise gifts that are out of this world!