I was lucky to meet US author Robin Yardi at the Big Sur Writer’s Workshop I attended last December.

Robin’s hilarious new book, The Midnight War of Mateo Marinez has just been released in Australia.

Robin Yardi is the author of nonfiction picture books and absolutely-not-nonfiction middle grade novels. A former classroom teacher, Robin now leads school groups through her local natural history museum, helping kids handle snakes, frogs, and stink bugs, while sneaking in learning about zoology and an appreciation for the natural world. She lives in California, but thanks to Skype she can go anywhere. For more information visit: www.RobinYardi.com!

The Midnight War of Mateo Martinez 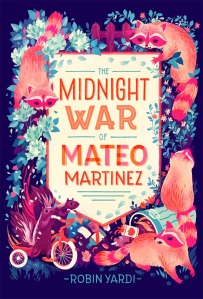 I’ve reviewed Robin’s book here, and she has some great writing tips at the end of this post.

Nobody believed me when I said two skunks stole my old trike. But I’d seen those stinkers take it. Swear.

This is one of the funniest openings to a children’s book that I’ve read, and with The Midnight War of Mateo Martinez by Robin Yardi the great humour doesn’t end there.

Mexican-American fourth grader, Mateo Martinez has more than his fair share of problems. His social life is in tatters after his former best friend, Johnny deserted him for the ‘cool kids’.

To make matters worse, two skunks really did steal Mateo’s trike (which technically now belongs to his little sister Mila), and not only is Mateo being blamed for its disappearance, but he’s also suspected of other mayhem in the street.

But Mateo sees himself as a knight and getting back the trike could be just the crusade he’s looking for.

Just as well Mateo has a true friend, Ashwin, a guy who enjoys spending time in the library as much as Mateo does, and who also seems to have the honourable qualities needed to be a knight. Ashwin has an understanding of things and a calm wisdom that help Mateo navigate his way through his problems.

When Mateo and Ashwin find the skunks and the missing trike they discover what’s behind the theft. The skunks need the trike to defeat the racoons who invade the playground and bully them at night, in much the same way as Mateo and Ashwin are harassed by Danny Vega and his gang at school.

This is Mateo and Ashwin’s chance to prove their bravery and skill.

What ensues is a fierce midnight battle for the playground in which Mateo and Ashwin realise that five-year old Mila also has what it takes to become a knight.

One of the things I loved most about The Midnight War of Mateo Martinez was the sensitivity and authenticity with which the relationships are handled. Mila is an annoying little sister, but Mateo feels deeply responsible for her wellbeing, and his strong sense of love and fairness mean he treats her with respect and caring.

Packed full of humour and action, The Midnight War of Mateo Martinez also has deeper layers. The skunk/racoon war, is symbolic of Mateo and Ashwin’s struggles at school. This makes winning even more important.

The Midnight War of Mateo Martinez is a heartwarming tale of family, adventure and the true meaning of friendship. It’s a book about empowerment and self-belief.

This stunning hardcover publication is released in Australia by Walker Books for readers aged 8 +.

1. Indulge in creativity and questioning

When I talk to kids it’s clear that they have about ten bananas, crazy, creative ideas an hour, and they ask hundreds of questions a day (scientific fact). So I know that we all have it in us, that ability to create and question, which is where I think great stories come from. Writers have to be ready for inspiration. We have to indulge those crazy questions and see where they take us, just like kids do! When I was sitting on the couch one night next to my daughter, we saw an adorable baby skunk scatter some snarling raccoons and a screeching stray cat off of our back porch without raising its tail. I asked a crazy question. “What do you think skunks, and raccoons, and stray cats are up to all night? Do they go to the playground? Do they ride the slides?”

“How would they even get there?” my daughter asked.

“On your creaky old trike! Just like you! Bet you they steal it every night!”

My daughter laughed, so I knew I had a great beginning. I immediately imagined two skunks stealing off into the night on a kid’s old rusty trike. I followed them, those two crazy ideas of mine, into my first draft, just to see where they were going. 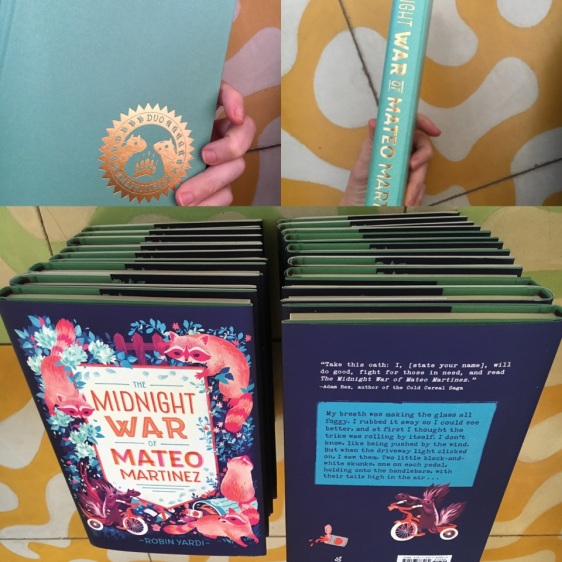 When writing, especially in the first few drafts, I go deep inside my characters. I sift through their rooms, to see what’s hidden in their sock drawer or in the back of their closet. I know if their favorite shirt glows in the dark, or has a gorilla on it, or a hole where they are always tugging. I find out everything I can about them, sometimes I draw their rooms, sometimes I have them write letters, sometimes they write in journals or do homework assignments for me. Not all, not even close to all, of those details end up in the book. But knowing them that well allows me to hear their voices, to know how they will act and react when I throw something amazing in their path… like two talking-trike-riding skunks!

I think you have to write like you are your own audience. Like you ARE a kid. THE MIDNIGHT WAR OF MATEO MARTINEZ indulges in a fascination with dumb animal and fart jokes, frustrations with parents and siblings and friends, worries about identity and growing up. This is stuff you can’t roll your eyes at (I think), if you really want to get it right. Plus, fart jokes are funny, so stop pretending like they’re not!

I believe kids are savvy readers and deep thinkers, who have high expectations of books. They better be good! This is something I keep in mind when revising. Is it good enough for kids? How can I make it better, clearer, more meaningful and more fun?

When writing and revising I’m always remembering how important books were to me as a kid. They taught me about the world and they were my best friends. As I’m working on making my characters and my plot richer and funnier, I’m always believing. Believing that the book I’m working on will be important to some kid.
If I can just get it right.