Today, Janeen Brian is back at Tuesday Writing Tips to talk more about the research process involved with her two camel books, Hoosh and Columbia Sneezes.

Can you tell us about the most moving camel story you uncovered when you were doing the research for Hoosh?

More than a story, I think it was an attitude that moved me.

Whose story was it and why did it move you?

When the editor proposed I write an information book about camels, I agreed, because of my respect for the animals and their ability to adapt to the harshest living conditions.

By the time I had finished researching and writing, that respect and amazement for the camel had deepened. However, it now went hand-in-hand with the original trainers and owners who first brought camels to Australia – the Afghans, as they were commonly called, although the men who crossed the oceans in the 1800s, living in the holds of ships with their animals came from many countries including India, Pakistan as well as Afghanistan.

For months on end, these hardy men trekked the long, lonely stretches of sandy, rugged terrain. They were separated from their wives and families back in their homeland, and to a large extent, ostracised by Anglo-Europeans because of cultural and religious differences. However, those same settlers relied entirely on camel transportation to bring them the goods they so desperately needed. No corner shop to be seen! Prior to cars and trucks, camels carried every item needed for everyday life, from windmills to roofing iron, schoolbooks to sugar and wool bales to wire.

My respect for those early camel men and their animals will always remain with me.

You took over 1500 hours to research and write this book? Why did it take so long? Is there anything you would do differently next time?

Although I made an outline of what I wanted to research, I probably over-researched in my need to feel more confident with the material. The topic also grew as I discovered more unexpected information. And because I had never tackled such a book before, I was treading new ground in both sourcing and noting.

However, nothing is ever straightforward. Verifying one small piece of information alone took six hours. In 1866, a steamer carrying the first load of camels arrived in South Australia. But was the steamer called the Blackwall or the Blackwell? It was written both ways in many books and newspapers. I finally validated it as the Blackwall through carrying out a number of searches at various maritime museums.

I believe you collected 36 folders of information for the book. Where are they now? Do you have any tips on how to store research information?

I have culled some notes but the majority of research still lies in folders in large, rollaway plastic tubs in my office. It would need another review to decide on what else to cull and what to save. A librarian has told me that special material, ie primary sources, documents or photographs should be stored in acid-free plastic sleeves.

When you were researching for Columbia Sneezes did you find a camel that was allergic to sand?

No. That was purely a tale.

Do camels really do what Columbia does to stop the sand getting in his nose?

Where did you get this research from?

That was one of those aha! moments. The original resolution of the rhyming picture-book story wasn’t working. I had tried many different versions during the editing stage when suddenly a piece of random research from my information book, Hoosh! popped into my head and neatly solved the problem. 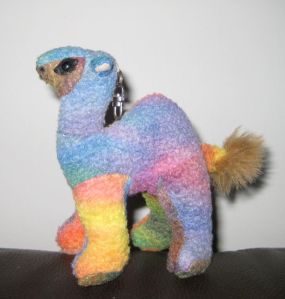 Did the research inspire the idea for the book?

In a way it did. Whilst in Alice Springs at The Voyages Camel Cup race, I bought a small soft-toy, rainbow coloured camel. Back home, I set it on top of my printer and whenever I felt exhausted or frustrated with the project, I’d look at the little camel and somehow find the energy to keep going. One day, my young grandson and I made up a story using the little camel as a character. He was a sneezy camel, and several years later I used that story as a basis for Columbia Sneezes!

Do you have any other tips for us about the research process?

These days, the internet offers greater access than ever to research, but use it widely because often the material isn’t validated and can vary. However, it’s a great tool to lead you towards both primary and secondary sources. Similarly, read widely because information in books can vary as well.

Cross-referencing is good because often particular errors can otherwise simply be passed on. Oral transcriptions, available from libraries, are a great source of real life information, often triggering story ideas as well as giving first-hand knowledge or attitudes of the person, or of the time. The same with diaries. Much information can be gleaned too from studying every aspect of a photograph. And, importantly, be aware of people’s time, and be prepared to thank them.

Thanks so much for visiting DeeScribe writing and sharing your fascinating experiences with us, Janeen.

If you want to know more about camels, research and writing, check out Janeen’s fabulous blog at http://janeenjottings.blogspot.com/ where she’s going to have more great tips and tales.

NEXT WEEK AT TUESDAY WRITING TIPS, POET STEPHEN WHITESIDE IS VISITING TO TALK ABOUT  MEDITATION AND WRITING