This year marks seventy-five years since the end of World War II, an important part of our heritage. And perhaps because of the pandemic and other modern day hardships, books set in WWII seem to be more popular than ever.

Stories of WWII heroines and heroes continue to inspire us.

When working on another book set in Paris, I stumbled across true accounts of Muslims at a Paris mosque who saved Jewish children during WW2, and it became the inspiration for my new book, Beyond Belief – Heroes of the Holocaust.

Beyond Belief – Heroes of the Holocaust

In 1942, in the Grand Mosque in Paris, 11-year-old Ruben is hiding from the Nazis. Already thousands of Jewish children have disappeared, and Ruben’s parents are desperately trying to find his sister. Ruben must learn how to pass himself off as a Muslim, while he waits for the infamous Fox to help him get to Spain to be reunited with his family.

One hint of Ruben’s true identity and he’ll be killed. So will the people trying to save him. But when the mosque is raided and the Fox doesn’t come, Ruben is forced to flee. Finding himself in the south of France, he discovers that he must adjust to a new reality, and to the startling revelation of the Fox’s true identity.

Family stories about my grandfather’s time in Dachau and my father’s escape from Austria after Kristallnacht, made me want to write about the Holocaust and when I came across the true life interfaith solidarity story of Muslims saving Jews from the Nazis, I knew I had to tell it.

Today I’m featuring three amazing  books set in WWII –  Conspiracy of Lies by Kathryn Gauci released in 2017 and two new books out this year, The Deceptions  by Suzanne Leal and Red Day by Sandy Fussell.

When Claire meets the mysterious Marcel, she knows there will never be another man like him in her life. But he’s not the man she thought he was and by the time she realizes, it’s too late. She’s already in love with him. When she takes on a pivotal role in the Resistance, Claire is risking her life for both her man and her country, but ultimately she must choose between them.

Conspiracy of Lies is rich with suspense, and interwoven with complex relationships, both past and present. The dual timeline story keeps us turning the pages as we discover the truth alongside Claire’s daughter, Sarah.

This is a book for adult readers with the relationships explored on both an emotional and physical level. The characters are so well drawn that we feel like we know them, even the minor players.

One of the things I loved most about this book was the way the incredible historical detail was woven seamlessly into the story. The story starts in Brittany in 1940. The Phoney War is over and the real war has begun in France.

Author, Kathryn Gauci’s depiction of occupied France and life in the Resistance is so visceral that we can imagine ourselves right there in the story.

Kathryn and I talk about the research behind our books, Beyond Belief – Heroes of the Holocaust and Conspiracy of Lies here.

THE DECEPTIONS by Suzanne Leal

I interviewed author Suzanne Leal on my blog on 17 April so I already knew some of the background to The Deceptions and the fact that it was inspired by true events, and perhaps that’s why the authenticity of the story and setting shine through. 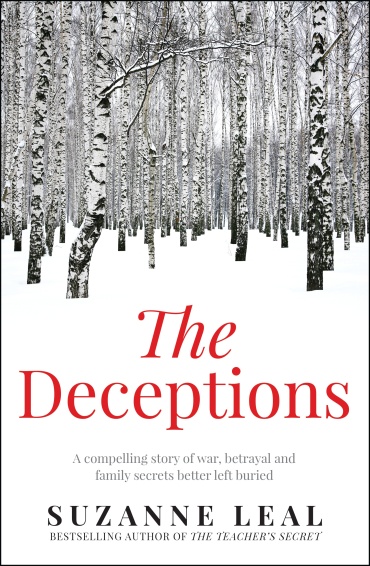 It is both tragic and inspiring as we follow the survival story of Hana Lederová taken from her home in Prague in 1943, and imprisoned in a ghetto where she accepts the advances of a gendarme in return for his protection, but soon discovers that nothing and nobody can protect her from the Nazis.

This is another dual storyline as we follow the stories of Hana and her modern day granddaughter, Tessa who is suffering the same kind of manipulation by a man in power.

When their two worlds come together, secrets of the past are spilled and deceptions revealed that have far reaching consequences.

Suzanne Leal draws us into Hana’s life of fear and hardship, and we take each step with her, wondering what new horror is around the corner and whether she can survive it. We know she does because she has a granddaughter, Tessa, but we wonder whether her life can ever have any semblance of normality after what she has gone through.

Powerful characters, suspense and the eloquence of the narrative kept me turning the pages of The Deceptions and made me ponder at the end whether truth really is more important than anything.

Set against a backdrop of the 1944 Cowra Prisoner of War Camp breakout, this powerful story explores an important part of Australia’s past and how it informs the future.

Set in a modern-day small town among the remnants of a Japanese POW camp, this is the story of Charlie. Charlie has synaesthesia and hence sees and hears differently: people have auras; days of the week are coloured; numbers and letters have attitudes. But when Charlie meets Japanese exchange student Kenichi, her senses intensify and she experiences flashbacks, nausea, and hears unfamiliar voices in her head pulling her back to the town’s violent past.

Main character, Charlie isn’t looking forward to the arrival of Japanese exchange student, Kenichi, especially seeing as he’ll be occupying the room that used to be her brother’s.

Charlie is determined not to like the new arrival, but they have a connection that she has no control over, and he seems to have special abilities just like her.

As their friendship develops so does the mystery and intrigue in the story, and the widening gulf between Charlie and her mother.

It’s only through exploring the past that they can possibly find some resolution to the events that have come between them, and find closure for Kenichi and his family too.

I loved the uniqueness of Charlie, the main character and the way this story transports us between different worlds in such an unusual and vibrant way.

There’s also a strong theme of family and here again we see the effects of war through the generations. Red Day not only transported me into the fascinating world of synaesthesia but also Japanese war history of which I had very little knowledge. And it depicts an Australian experience of WWII.

With its elements of fractured families, fear and prejudice, Red Day is very relevant in today’s world.

I have another book on order set in Australia in this era and also for young readers – Haywire by Claire Saxby and I’ll be interviewing Claire right here so keep your eye out for this post.

Have you read any other great books set in WW2II that you can recommend? Please let us know in the comments below.