With that in mind, here are my five tips for researching historical fiction. 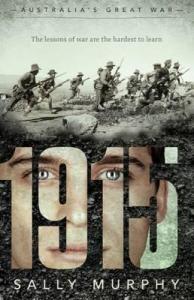 Overall, writing historical fiction can be really rewarding. Once I’d started researching I found it difficult to stop. In fact, even though the story is finished and published, I am still learning new things about the war. Along the way I also discovered that I quite like the challenge of this novel form, so perhaps 1915 won’t be only historical novel.

Thanks for having me on the blog, Dee.

My pleasure, Sally. I must admit, Trove is a favourite of mine too:)

When Australia throws its support behind Britain in its fight against Germany, young teacher Stan Moore is one of the first to join up, swapping the classroom for adventure in Europe. But the 11th Battalion is sent with the newly formed Anzac Corp to Gallipoli, where Stan is confronted by the hard lessons of war. Though conditions are dismal and death is everywhere, so is the humour and bravery that is the true spirit of Anzac.

Part of the Australia’s Great War series from Scholastic Australia, 1915 was released in time to commemorate the 100 year anniversary of the landing of the first ANZACs at Gallipoli.