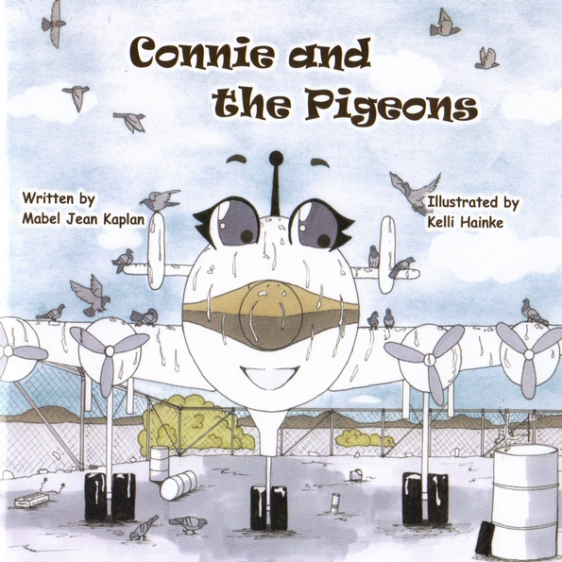 Today, author Mabel Kaplan is visiting my blog to tell us about how she turned an amazing true story into a wonderful picture book for children.

“Connie and the Pigeons” tells the incredible tale of the discovery and restoration of an aeroplane which used to fly the famous ‘kangaroo route’ between Australia and England in the 1940’s.

Hello Dee, thank you for inviting me to tour Connie and the Pigeons on your blog

Did you know the Connie in your story?
I’m almost too embarrassed to confess I knew nothing about ‘Connie’ when I began writing about her.

How did you hear about the Connie that ended up in the aeroplane graveyard in Tuscan?

Early in 1996 a 4cm wide six line snippet in the West Australian Newspaper jumped out at me. I read how two Australian air buffs had rediscovered a Lockheed Constellation called Connie in an aeroplane graveyard in Tucson, Arizona where it had been saved from demolition by a flock of pigeons who had taken up residence inside her. From the information given I understood this to have been the aircraft that had made the inaugural passenger flight from Sydney to London on the 1st of December, 1947.

Did you know the Australian air buffs who rescued her?
Not then, but I later had contact with two of those involved and learned that far from being only two air-buffs there had been a whole team of men – and one woman – mainly retired Qantas pilots, engineers, mechanics who were members of the Historical Aircraft Restoration Society (HARS) in New South Wales.

Why did you decide to tell Connie’s story?

The story would not leave me alone. I have a particular interest in developing stories that have an historical base and this story just begged to be a Children’s Picture Book.

How long did it take you to do the research for this book?

Though I researched aspects of the story on and off for close on eleven years, the story itself took shape very quickly. Realizing that December 1997 would mark the fiftieth anniversary of the first long distance passenger flight between Australia and England I hoped to find a publisher in time for the story to celebrate the occasion. I submitted it to a publisher who held onto the manuscript for the best part of a year and then advised it did not meet their current needs. With only three months before the fiftieth birthday of the great event, in desperation, I sent it off to Qantas Publications in the hope that it may find a place in the in-flight magazine. Too late! The edition to mark the fiftieth birthday had already gone to print.

Can you tell us how you went about gathering the information you needed to write this story?

With the pressure off a publication deadline, between doing other things, creating and writing other stories, I looked back at the text and began a kind of dialogue with or a questioning of the information I had.

Where did the name ‘Connie’ originate? Was my face red when I realised that Connie was short for Constellation – Lockheed Constellation – and that my ‘Connie’ was by no means unique? There were as many ‘Connies’ as their were Constellations. They were all called ‘Connie’. However, by the 1990’s the remaining craft were few and far between and the HARS groups’ search had found the one in Tuscon, Arizona the only available one suitable for restoration. She was indeed restored with the name ‘Connie’ inscribed where once the word ‘Qantas’ had been. Using some creative licence, though I know it is not the case, I infer that this ‘Connie’ was the ‘Connie’ who made inaugural flight from Sydney to London.

What was it about the pigeons invading the plane that prevented it from being used as scrap? Was it just the smell (as I say in my story) or something more? I discovered the pigeon droppings made the metal unsuitable for melting down and reuse.  Although, in the end, I did not add this in my story because I decided young children would understand a bad smell better, the knowledge enriched the story for me. And as I was to discover later, the pilots who read the book were delighted with the way the story was told and did not miss this detail – probably because they knew it already.

Why Tucson, Arizona? My first thought was that there must surely have been a suitable dumping ground closer to home. That’s when I found out quite a bit about the politics behind the acquisition of aircraft.  In this period Qantas was Government owned and up to the purchase of the Lockheed Constellation (an American aircraft) had always purchased from the British Overseas Airways Corporation (BOAC). There were some heated exchanges between the then Prime Minister of Australia, Ben Chifley and his British counterpart – but in the end, Lockheed won out. It now made sense that once an aeroplane was passed its ‘use by’ date it be returned to the home of its maker for spare parts or recycling.

Why did you decide to self publish?

Time was passing and by now I had a better understanding of the time lag between submitting a story and its publication.  I also wanted to test the story so I entered it in a local Writing Centre’s 2001 competition for Children’s Literature. It was listed among the awards. The judge’s comment: ‘This is a great idea and Connie is a lovely character. Another edit and a careful look at the target audience would make it sparkle.’ Over the next two years I workshopped the story at several primary schools and attended some writing for children workshops. The result: for the most part the story remained in tact but was much more focussed on SHOWING versus telling – not that I was unaware of this ‘mantra’ – more that I had a performance background as an ‘oral storyteller’ and sometimes forgot to make the most appropriate transitions for the written form.

Come 2004 and I knew if I was to meet my self-inflicted deadline of the 60th anniversary of Connie’s inaugural flight, I needed to start submitting it now. I sent it out to an Australian Children’s Publisher and waited! As soon as it came back ‘rejected’, I tried another. In all, I sent it to no less than fourteen publishers. My only consolation, apart from two, all of the rejections came in the form of encouraging letters rather than proforma rejection slips. I was told it was ‘an appealing story’, ‘well written’, ‘read aloud beautifully’, etc but did not meet the publishers’ needs at this time. One publisher even wrote they had tried out some illustrations but in the end decided it was not working for them.  I even revamped the manuscript in what I hoped was the style of a reader and included ‘fact files’. Still no go.

By now I was obsessed by Connie. I found myself unable to write any other children’s work. I had to get her out of me! I refashioned her as a Children’s Picture Book and looked for an illustrator. I spent most of 2006 editing an anthology of children’s stories for a local Writers’ Centre and in the process of editing a particular piece developed a warm relationship with that writer and discovered her secret passion for art. We cut a deal. She illustrated Connie and I edited her work. I set the book up how I wanted it and found a printer. Then, on the 1st December, 2007 a local school where I’d worked organised the launch of Connie.

And I was free to write again!

Do you have any other stories like this planned?

If you mean, historical fiction, I am working on what I hope will be a contemporary chapter book for older children (10-12 year olds): Paradise Island. It is told against the background of Rottnest Island and the 1899 wreck of the City of York – and touches on preteen depression and adult PTSD. I thought it was almost done but when I reread it the ending doesn’t work well for me. I think it needs a second part. Time will tell.  I also have several others still in the dreaming stage.

I currently have half a dozen or so younger children’s stories on the road in search of a publisher.

Since publishing ‘Connie and the Pigeons’ two HARS members have contacted me. (I have no idea how they found me!) One sent me his book ‘Bringing Connie Home’ by Gary Squire – the nitty gritty story of the search, the bureaucracy and technical hitches encountered; the other sent me a DVD of the pictorial story of the restoration: ‘An Affair with Connie’. He was so enamoured by my book that he took it to the HARS souvenir shop in Wollongong NSW and they ordered 30 copies. A similar order came from the Qantas Founders Museum in Longreach Qld.

Thanks Mabel, it has been great to have you visiting my blog. People (including other writers) often ask me, ‘How do you turn fact into fiction’. You’ve given us such an interesting and comprehensive account of how you went about this difficult task.

For those on the Eastern coast it is also available from

You can also catch Mabel on her tour through cyberspace at the following locations: